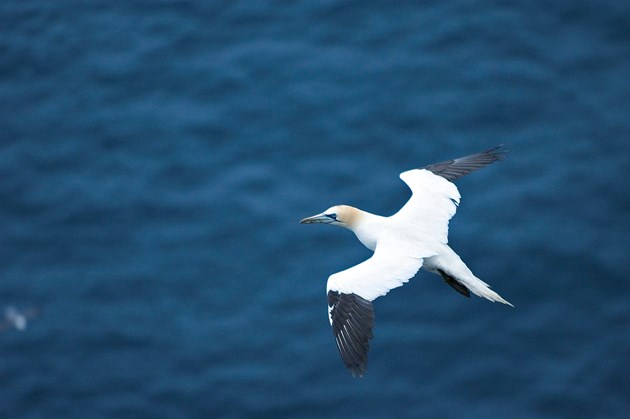 NatureScot’s National Nature Reserves (NNRs) in Shetland celebrated some great success stories in 2021, including increases in some breeding seabirds.

Hermaness NNR is the fourth largest gannet colony in Scotland after the Bass Rock, St Kilda, and Ailsa Craig. A total of 29,562 gannet nests were counted at the reserve in 2021, a 15% increase since the last count in 2014.

On Noss NNR 28 storm petrels replied to call recordings played next to potential nest holes in a sample of stone wall. This is the joint highest total since this secretive seabird was found breeding on Noss in 2008.

A total of 23,733 guillemots were counted at Noss, where numbers have remained stable since 2004, following a decline.

Sadly no great skua or ‘bonxie’ chicks- were found to have fledged from sample plots at Hermaness, while fulmars had their second lowest breeding success on record, with bird flu thought to have had an impact on the former.

During the 2021 season, 108 bird species were logged on Noss including the first records of red grouse (found sheltering in the toilet!) and the exotic-looking hoopoe.

Meanwhile, work got underway on the new Hermaness hill path and welcome area. 166 loads of boardwalk material were flown by helicopter to the site in total (in early spring and autumn, avoiding the bird breeding season), where 1,940m of new boardwalk will be installed, retracing the historic path to Muckle Flugga signalling station on Hermaness Hill, and creating a circular route around the reserve.

The boardwalk will protect the fragile peatland from erosion, and be routed to avoid disturbance to sensitive nesting birds. An interpretation shelter and toilets are also being constructed in the car park, and new signs installed at the reserve entrance and at the cliffs.

The work is being delivered through a partnership of NatureScot, Shetland Islands Council and VisitScotland, and is funded by the Natural and Cultural Heritage Fund, the Rural Tourism Infrastructure Fund,and NatureScot. Works are due for completion for the 2022 season.

Juan Brown, NatureScot Operations Officer, said: “While the fortunes of seabirds on Shetland have been varied this year, it is encouraging to see that gannets are continuing to flourish, and that guillemot numbers are also being maintained, with the Noss storm petrels also seemingly doing well.

“It’s also been fantastic to see work getting underway on the Hermaness hill path and welcome area. This is a really exciting project that will greatly improve the visitor experience at the reserve, and we’re looking forward to it opening in 2022.

“Finally after a fallow year in 2020 due to the Covid pandemic we were delighted to be able to re-open Noss NNR to visitors. While numbers continued to be restricted by Covid measures, 851 people still made the Noss Sound crossing.” 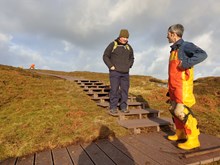