The special dunes at the West Sands in St Andrews are recovering well, according to a recent survey by Scottish Natural Heritage (SNH).

The dunes, part of the Eden Estuary Site of Special Scientific Interest (SSSI) and the Firth of Tay and Eden Estuary Special Area of Conservation, were found to be recovering with new dune-forming plants present for the first time in several years.

In March 2010, the dunes were hit by a storm surge at the same time as a particularly high tide, highlighting the severe coastal erosion and flooding of the West Sands. The effects were felt not only at West Sands but also over the Links Courses, adjacent farmland and along large stretches of the north east coast of Scotland.

Access to the dunes is now managed, with sensitive paths closed off, and there are now boardwalks and signed dune paths, providing access to the beach from the car park.

“We were delighted to discover the dunes are recovering so well. This is thanks to the hard work of a partnership made up of local councillors, conservation bodies including SNH and the University of St Andrews. We’d like to thank all our partners for working hard with us over the last five years to restore and protect the West Sands dunes.”

Mechanical cleaning of the beach has also stopped, replaced by manual litter picking. The seaweed left behind allows sand to build up and sand dune plants to colonise and expand seawards. Plants are vital for the dunes – they help keep the sand in place, so the dunes can shift but they aren’t blown away and eroded.

The majority of the Out Head section is now closed to vehicles and managed in a more sensitive way, with a conservation grazing herd provided by local farmer, Robert Dewey. This has led to additional benefits for nature, with birds such as ringed plover breeding successfully for the first time in decades.

But the work to save the dunes goes back even further. In 2010, a large-scale dune restoration project was completed at the Swilcan section, with tens of thousands of tonnes of sand used to re-profile the dunes. Local volunteers provided their time to replant this section under the supervision of Fife Coast and Countryside Trust’s Ranald Strachan, work highlighted in the BBC’s Countryfile programme at the time.

“The entire length of the dunes, almost two kilometres to Out Head, has been fenced off and dune grasses planted in some of the more exposed areas. This is thanks to the efforts of The Links Trust, the Fife Coast and Countryside Trust, the wider partnership and the community. Thanks also to the St Andrews Community Fund and Fife Council’s Transportation Services. And without the understanding and efforts of beach users and volunteers during the planting phases, the improvements would not have been possible.”

Unfortunately, in recent weeks there have been a couple of incidents that have caused damage to the dunes. It’s suspected that small fires or stray fireworks have led to a significant area of dunes to be burnt. Fires and fireworks are normally prohibited on West Sands and permission should be sought from Fife Council. Fife Coast and Countryside Trust recently published a West Sands Charter, a helpful guide on how to enjoy the beach recreationally and responsibly. A copy is available by the main boardwalk or on their website.

The West Sands partnership is still hard at work. One future goal is to manage the big holes in the dunes (blowouts) which are eroded by wind, and causing further vegetation loss. The Fife Coast and Countryside Trust have secured a licence to take sand from the beach at low tide to link the edges of blowouts together. This will allow sand to build behind them and the dunes to repair themselves. This is already happening in some of the smaller blowouts, thanks to the dune fencing and grass planting efforts. The Links Trust will be carrying out these works in early 2016, so don’t be surprised to see machinery moving across the beach when this starts.

The West Sands Partnership was formed in 2010 and is chaired by a Fife Councillor representing St Andrews and Strathkinness, with representatives from Fife Council, The Links Trust, Fife Coast and Countryside Trust, Scottish Natural Heritage and The University of St Andrews. 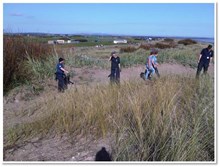