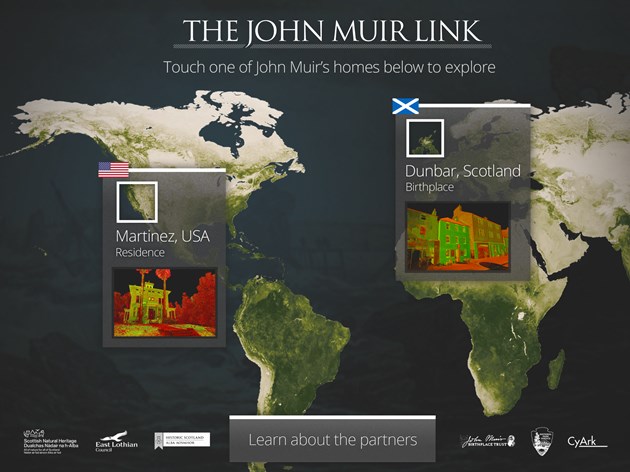 A transatlantic project which allows people across the world to virtually step inside the Scottish and American homes of Scottish conservationist John Muir, using cutting-edge 3-D scanning technology, has been unveiled today.

The laser technology surveys sites in 3D, using the same techniques that have already created a digital archive for World Heritage sites such as Skara Brae on Orkney, the Antonine Wall, and world famous landmarks such as Mt Rushmore and the Sydney Opera House (all part of the Scottish Ten project at www.scottishten.org).

The John Muir Birthplace Trust in Dunbar, where Muir was born, and the historic house where Muir and his family lived for many years in Martinez, California, have both been scanned. Visitors can now see detailed digital models, with photographs and a virtual 3D fly-through tour at both houses, as well as online at http://bit.ly/1jk6YqR

The project is led jointly by Scottish Natural Heritage (SNH) and Historic Scotland, in conjunction with the John Muir Birthplace Trust, the US National Park Service and the CyArk Foundation. It links to 2014 Year of Homecoming and the centenary of John Muir’s death.

Two special stone carvings have also been placed at each location to symbolise the enduring link that Muir provides between both countries.

Richard Davison, SNH’s People & Landscapes programme manager, said, “John Muir was always experiencing and exploring nature. He’s renowned in both the US and Scotland, and indeed in many other parts of the world. We hope this international project will inspire people to learn more about John Muir and connect with nature by experiencing it, exploring it and helping to look after it.”

“Using the very latest in technology, we have brought our heritage to life. We have created an exceptionally accurate digital model of the site to conserve it for the benefit of future generations to come.”

Will Collin, a member of the John Muir Birthplace Trust, added, "John Muir’s love of nature was awakened here in Dunbar and, until the end of his life, he remained 'a Scot to the backbone'. This exciting project will make his boyhood home accessible across the whole world. It will let folk see what first inspired the lad from Dunbar and helped make the adult Muir nature’s foremost, and most eloquent, advocate."

Cllr Tim Day, Cabinet Member for Community Wellbeing for East Lothian Council, said, “I am thrilled that the birthplace of John Muir, the father of conservation and boy from Dunbar, has been scanned as part of this project. I am looking forward to seeing the results in the John Muir Birthplace Museum.”

Historic Scotland is an executive agency of the Scottish Government charged with safeguarding the nation’s historic environment. The agency is fully accountable to Scottish Ministers and through them to the Scottish Parliament.

CyArk is a non-profit entity whose mission is to digitally preserve cultural heritage sites through collecting, archiving and providing open access to data created by laser scanning, digital modelling, and other state-of-the-art technologies. For more information visit www.cyark.org 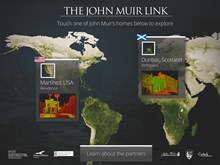