You are here:
Home
News Releases
Sniffer dogs help discover storm petrel colony on the Isle of May in UK first 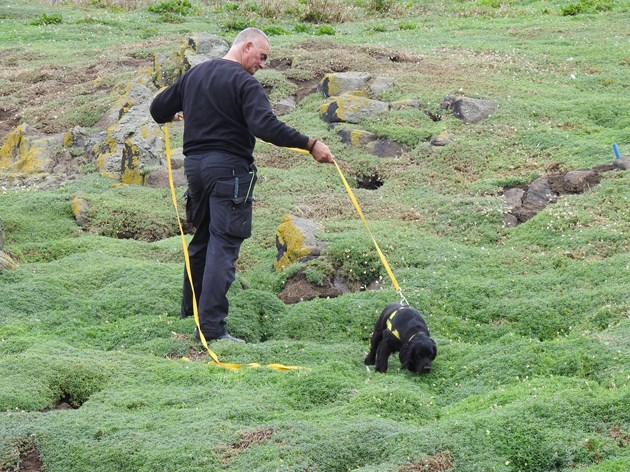 For the first time in UK conservation, sniffer dogs have been used to locate a seabird colony, with the location of a storm petrels discovered on the Isle of May in September.

Storm petrels were confirmed to be breeding on NatureScot’s Isle of May National Nature Reserve (NNR) for the first time this past summer. But with the sniffer dogs’ assistance, the location and extent of the colony has now been detected.

Storm petrels are small oceanic birds that breed in the UK during the summer months but spend their lives out at sea. The vast majority of the population – about 26,000 pairs breed in the UK – can be found on remote islands, especially in the north and west of Scotland. The species is notoriously difficult to monitor due to its nocturnal habits and preference for these remote, rocky islands.

Five professional sniffer dogs were trained over a two-month period to locate the scent of storm petrels underground. Dogs have a much greater sense of smell than humans, and can cover larger areas in a shorter space of time to locate potential nest burrows. The time of year was crucial as storm petrels were still present in underground burrows, but all other seabirds had left the island. This ensured no other seabirds or wildlife were disturbed by the presence of dogs.

Dogs were used for 20 minutes at a time to walk transects and search for nesting storm petrels underground, allowing rotation and rest periods for each dog and handler. Set areas were checked and each positive indication was marked for further investigation. Work will be conducted next spring with endoscopes and playback recordings of calls to establish occupancy of these burrows. A total of 63 confirmed positive responses – revealing burrows were found. Burrows indicate where pairs are nesting, as well as sites for some non-breeding birds and prospecting young birds.

David Steel, Reserve Manager at the Isle of May, said:

“We were really excited to work with the dogs and the dog handlers to find out more about storm petrels on the island. These special seabirds come ashore under the cover of darkness and nest underground in crevices, burrows, cairns or stone-walls, raising a single chick. During that time, their activities – singing away in total darkness, as well as their unique musky smell, make these birds so fascinating and mysterious. We’re delighted to confirm the storm petrel colony after such a great team effort over the last three years by so many people.”

Dr Mark Bolton, the leading authority on storm petrels in the UK and a Principal Conservation Scientist for the RSPB, said:

“It’s very exciting to discover a new breeding colony of storm petrels in the UK, which considerably extends their known breeding range on the east coast of Britain, and increases their resilience to the many challenges our seabirds face. The fact that specially-trained scent dogs were used to locate many of the nesting sites is ground-breaking in the UK, and I hope it heralds a new era of greater use of scent dogs for seabird monitoring here.”

“Having trained lots of different dogs over the years on a vast array different odours, this was a first for us to work in conservation and to locate a new colony of nesting seabirds. Dogs are a cost effective and fast method to cover the ground when conducting these types of surveys.”

Over the years, volunteers at Scotland’s oldest bird observatory on the island have been ringing non-breeding storm petrels and tracking their subsequent movements. Recoveries of ringed birds have shown links to much of the traditional range, mainly to the north and west of Scotland and Ireland.

For more information on the Isle of May National Nature Reserve, see the NatureScot website. 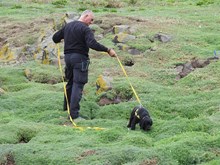 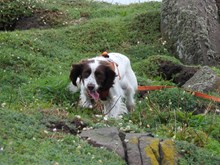 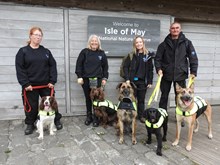