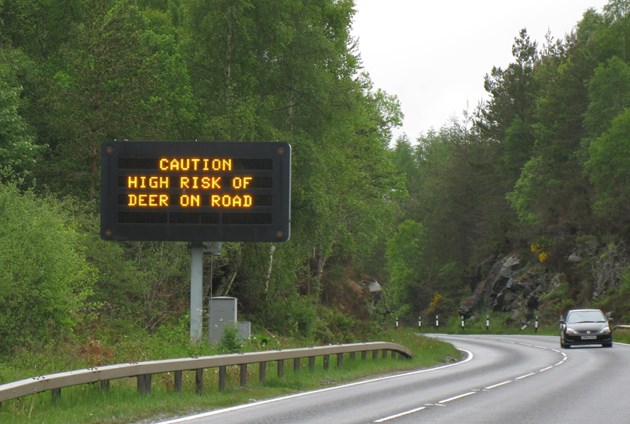 Scottish Natural Heritage (SNH) is warning motorists to be aware of the increased risk of collisions between deer and vehicles due to the shorter days at this time of year.

With night falling earlier, deer are more likely to venture on to grass verges near roadsides during peak commuting times as they browse and feed.

In response to the potential risk, SNH – in conjunction with Transport Scotland and Traffic Scotland – are placing warning messages on electronic variable messaging signs (VMS). From Monday 4 November to Friday 22 November the signs will warn motorists at key locations on the main trunk roads. These messages will be on signs on the A9, A87, A82, A85 and the A835.

It’s estimated that collisions between deer and vehicles could be as high as 12,000 per year in Scotland, resulting in 50 to 100 human injuries. The majority of collisions take place in early evening through to midnight, with another peak occurring from 6am to 9am.

Over the past 50 years, the number of wild deer in Scotland has increased, as has their range. In the same period, the volume of road traffic has almost doubled. This combination has led to increased deer-vehicle collision rates across the country.

Jamie Hammond, SNH deer management officer, said: "From October to December, deer are more likely to be on the road as they move down to lower ground to find food and shelter. The highest risk is from sunset to midnight and shortly before and after sunrise. Particularly in these peak times, we advise motorists to slow down and watch for deer crossing roads. Be aware that if you're driving near woods, deer can suddenly appear before you have time to brake. If you do hit a deer, report it to the police, even if you’re uninjured and your car isn’t damaged, as the deer may be fatally injured and suffering."

"The increased risk of collisions with deer in late autumn is greatest in areas where our three largest deer species - red, sika and fallow deer - are most abundant.  Late autumn coincides with their mating season, when they are highly mobile on the move to and from their rutting areas, and adult males will often chase blindly across roads in pursuits of females or rival males. In addition, the shorter day lengths bring rush hour traffic periods in line with the peak dawn and dusk activity times of all our deer species, adding further to an increase in deer collision risk."

“Transport Scotland is keen to work with colleagues from other agencies to help manage the potential impact that wild deer can have on trunk roads in Scotland.  The biannual campaign to utilise targeted parts of the VMS network has been developed to provide useful information to motorists in areas and at times where analysis of the data collected suggests there may be more chance of deer venturing across the road.”