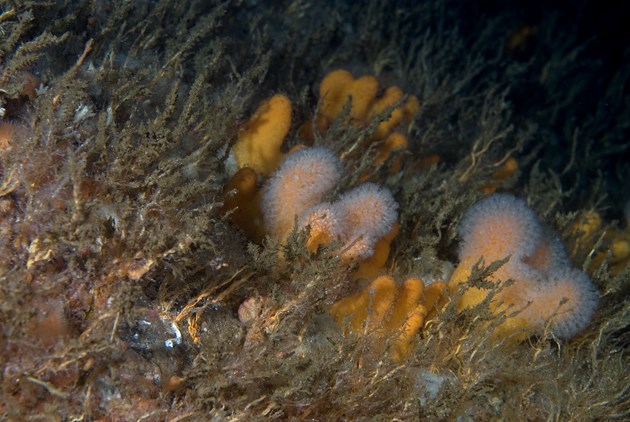 Divers have documented the hidden life of many of Fair Isle’s remote sea caves for the first time.

Marine surveys earlier this summer documented around 70 caves on the island, with dive teams battling weather conditions to carry out full biological surveys of four.

These included a spectacular 200 metre-long cave on the west of the island known as Diamond Cave.

Stunning images from beneath the waves show the characteristic sea cave habitats and species discovered, including corals, sponges and seasquirts.

The data gathered will help to map the sea caves around Fair Isle in more detail and increase knowledge about habitats and species in the community-led MPA, as well as sea caves around Scotland’s coastline more widely.

The surveys were commissioned by NatureScot and carried out by a team of divers from Heriot-Watt University.

Carol Hume, NatureScot Marine Protected Areas Adviser, said: “With so many challenges facing a survey of this kind - not least the weather and remoteness of this special Scottish island - we were really delighted to reach Fair Isle and complete work with the survey team.

To have gathered information for around 70 sea caves is a fantastic achievement and, along with four biological surveys, has given us a much greater understanding of these hidden habitats within the MPA.

“While the sea caves have been explored by local residents and divers, this is the first extensive and systematic documentation. It was an extremely special survey to be part of and we were hugely welcomed by the local community for which we’re really grateful.”

Dr Dan Harries, a marine ecologist at Heriot-Watt University said: “The coastline of Fair Isle is breathtakingly spectacular and it was a privilege to document the sea caves and their inhabitants.

“The majority of the sea caves were very shallow, so their walls were heavily scoured: the sand and stones on the bottom swirl around the cave during heavy seas, scrubbing off any life that might cling to the walls.

“The caves with deeper floors are where richer communities had established themselves. Some cave walls were decorated with the sponges including the delicate ‘lace sponge’, others with dense thickets of oaten pipe hydroids, which are related to jellyfish and corals.

“The deeper caves were also home to the aptly-named baked bean sea squirt, which looks exactly as you might imagine.”

The Fair Isle Demonstration and Research MPA is a community-led designation, with the aim of supporting research to expand understanding of the local marine environment, implement impactful conservation measures and illustrate the influence of small communities on policy development.

Stewart Thomson, a member of the Fair Isle community, said: “As a participant in the Fair Isle Marine Environment and Tourism Initiative (FIMETI), and a onetime scuba diver, I was very interested in the cave survey team's visit in August. I was pleased that the island was given a talk demonstrating what they were finding, and explaining how and why the various organisms and animals choose to live in such seemingly challenging habitats; and stressing their importance in the wellbeing of marine life.

“It is in understanding all aspects of life over and under the sea which is so important in identifying what needs to be done, in order to supervise the proper management of the marine environment, and I know the isle population very much appreciated their efforts, and will support any project which can improve our knowledge of something that we all rely on.”

More information and updates on the Fair Isle MPA can be found on the Facebook page: https://www.facebook.com/FairIsleMPA

The bioluminescent hydrozoan - technically not a species of jellyfish - was often seen washed into cave mouths during the survey. ©Graham Saunders 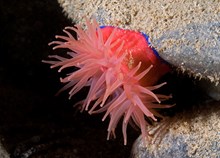 The beadlet anemone is one of the few animals that are able to survive in the violent surge conditions of the cave floor. South Haven Cave, Fair Isle. ©Graham Saunders

A small diamond-shaped hole in the roof of the cave gives the cave its name and shines a dim light on the dense clumps of oaten pipes hydroids that colonise the larger boulders. ©Graham Saunders 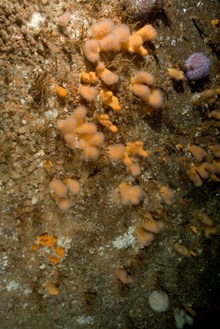