The three-year long Scottish Saltmarsh Survey, a joint project between the two agencies, has mapped in detail, and assessed the condition of, all known saltmarshes larger than three hectares or longer than 500 metres across the Scottish mainland and offshore islands.

Saltmarshes are found at the top of the sea shore around the Scottish coast, with the largest areas in the Solway Firth. They are exposed at low tide and covered by seawater at high tide to varying degrees. Upper marsh is not covered on every tide, and forms a transition area into terrestrial habitats.

Professor Stewart Angus of SNH, who managed the project, said:

“The Scottish Saltmarsh Survey report gives us a really valuable ‘snapshot’ of a habitat that is likely to change considerably in coming years as a result of climate change. We now have detailed mapped information on four of Scotland’s most important coastal habitats – saltmarsh, machair, dune and shingle – known as ‘soft coasts’. This work also helps the Scottish Government to meet its European reporting obligations.”

Saltmarshes are important coastal habitats which provide us with a range of natural services. They help to filter and regulate water, provide defences against flooding and they act as a valuable carbon sink. Saltmarshes also provide a refuge and food for a range of breeding, wintering and migrating birds.

Saltmarsh vegetation can help scientists to assess changes in land use and management, and help understand how people are affecting the coastal environment. It can also allow changes in climate and coastal biodiversity to be detected reliably into the future.

Dr Clare Scanlan, who led on the project for SEPA, said:

“Saltmarsh is a sensitive habitat that could play an important role in relation to coastal flooding, and we are using the results of this national survey to help us in reporting the ecological status of saltmarsh for the EU Water Framework Directive. “

Throughout the project the condition of saltmarsh was assessed against UK targets, which are set at a high level, beyond that which is needed to achieve Favourable Condition under the European Habitats Directive.

The report finds that the main reasons why some sites didn’t meet the targets set related to the presence of manmade structures, such as embankments, and a lack of transition habitats between the saltmarsh and land. These are issues which are not easily addressed through site management. Negative impacts of grazing were recorded more frequently on non-designated sites.

“One of the most interesting findings of the study was that saltmarsh appears to be much more dynamic than previously thought, and we identified more change in extent than had been anticipated. This was particularly true of the Solway, where pioneer saltmarsh had been replaced by Atlantic saltmarsh over a significant area, and much of the remaining pioneer vegetation was a lot sparser than before. This suggests that saltmarshes are not only keeping pace with relative sea level rise, but they are actually outpacing it at lower levels, by increased sedimentation. “

“This report represents a significant piece of work. In total 249 sites were visited, with more than 5,800 hectares of saltmarsh recorded and mapped. Pooling resources with SNH worked very well, allowing us to undertake the work cost-effectively. Further work is now required to separate natural variability from any trends associated with climate change, and the report provides us with a valuable foundation for this.”

The report is available on the SNH and SEPA websites and via the link below:

Founded in 1996, the Scottish Environment Protection Agency’s main role is to protect the environment and human health. We do this by regulating activities that can cause pollution and by monitoring the quality of Scotland’s air, land and water. SEPA is a non-departmental public body, accountable through Scottish Ministers to the Scottish Parliament. http://media.sepa.org.uk/ 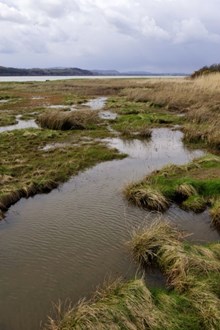