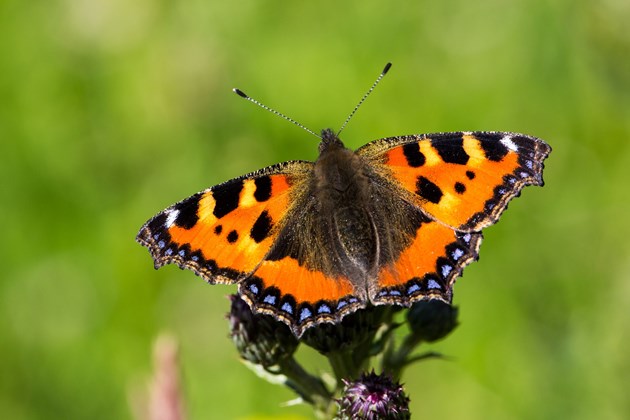 Official statistics published today by Scotland’s nature agency show that the abundance (number of individuals in a species) and occupancy (number of sites where a species is present) of 2,803 Scotland’s marine and terrestrial species have stabilised at levels similar to the 1990s, well below historic populations. The figures, which are mixed with winners and losers across many species, come as Scotland steps up efforts to restore and regenerate biodiversity across land, freshwater and seas by 2045 in the face of the nature and climate crisis.

The average abundance for 337 terrestrial species (birds, mammals, butterflies and moths) was stable over the long term (1994-2019).  In the short term (2016-2019), this indicator increased by 14%. This indicator is mainly driven by moths and birds as they contribute the most species (170 and 133, respectively).

Recorded terrestrial bird species abundance has remained relatively stable since 2004 – between 13% and 20% above their 1994 value. Garden bird species such as goldfinches are showing positive signs of recovery, in part due to bird feeders and as a result of Scotland’s changing climate.

The average abundance for 14 species of breeding seabirds fell by 41% over the long term (1994-2019). In the short term (2016-2019), this indicator declined by 9%. While the data presented does not capture the effects of last year’s outbreak of highly pathogenic avian influenza (HPAI) H5N1 in Scotland, it is clear that it has had a sizeable impact on some of our seabird populations, particularly great skua. Seabirds, such as kittiwakes, were already declining in Scotland due to scarcity of food and climate change, and experts believe indicator updates this spring will help quantify the further effects of HPAI.

Moths numbers have recovered in recent years (since 2015), probably due to warmer summers, although they remain 27% lower than their 1994 value.   Although the data available covers fewer species (25), butterfly abundance has increased rapidly since 2016, which is influencing the overall abundance of all terrestrial species over that period.  As with moth numbers, the increase seen in butterfly abundance is likely to be caused by warmer summers. In fact, the increases in butterflies and moths may be short lived and the effects of climate change can already be seen with declines in once-common species such as the small tortoiseshell.

The average occupancy (range) of 2,466 terrestrial species (invertebrates, lichens and bryophytes) has not been updated since the last release and so the latest available data remains an increase of 24% over the long term (1994-2016).  In the short term (2015-2016) the indicator was stable. Scotland’s lichens are of international importance. They need clean air to thrive and are a valuable indicator of pollution.

The results show clearly that nature is still in crisis; however, positive action to help protect and restore nature is underway thanks to crucial schemes such as the Scottish Government’s Nature Restoration Fund. Scotland’s largest-ever fund for nature supports vital work to tackle the biodiversity and climate crisis by putting Scotland’s species, woodlands, rivers and seas back on the road to recovery.

Nick Halfhide, NatureScot’s Director of Nature and Climate Change, said: “Scotland’s wildlife, on land and at sea, has a vital role in strengthening ecological health and helping us to build resilience in the face of the twin crises of biodiversity loss and climate change.  These results show the effects of climate change are already being witnessed through changes to Scotland’s species in our lifetime.

“Ambitious targets, such as those agreed at COP15 in Montreal, will help drive Scotland’s progress in an international context. The Scottish Government’s Biodiversity Strategy will cement the change required to not only halt biodiversity loss, but reverse it. We must grab every opportunity to protect the health of our natural world for generations to come before it’s too late.”

“I would like to thank the army of volunteers who gather the data behind this work.  We rely on them to collect, analyse and record Scotland’s wildlife in all weathers throughout the year.”

Biodiversity Minister Lorna Slater said: “Nature is central to our survival as a species - our economy, jobs, health and wellbeing depend on it. And crucially, our biodiversity is also essential in tackling the climate crisis - this publication is another stark reminder of what we stand to lose if we do not act to protect it.

“Here in Scotland the average abundance for 337 terrestrial species, such as birds, mammals, butterflies and moths, has remained stable in the medium term. And it is encouraging that we have seen a 14% increase over the past few years. However, species on land remain at broadly similar levels to the 1990s: well below historic populations. More worryingly, indicators also show that Scotland’s internationally important seabirds continue to decline.

“Our new Scottish Biodiversity Strategy, published at the end of last year, sets out our high level ambition to halt decline by 2030 and reverse biodiversity loss by 2045.  This year, we will set out how we will achieve that vision, and protect 30% of our land and seas for nature by 2030. We will be creating Highly Protected Marine Areas in at least 10% of our seas. And we will continue to deliver real change on the ground through our £65 million Nature Restoration Fund.”

The baseline of 1994 was chosen as it is the earliest for which we have comprehensive records.  It does not represent a target level. Other evidence (e.g. Natural Capital Asset Index) suggests that biodiversity in Scotland had already declined markedly prior to 1994.

The full statistical publication can be accessed at: https://www.nature.scot/doc/official-statistics-marine-and-terrestrial-species-indicators-experimental-statistic

The great majority of the contributing data sources above are collected through the efforts of expert and dedicated volunteer surveyors and recorders, without whom our knowledge of biodiversity in Scotland would be much poorer, and this indicator would not be possible.

Experimental statistics are produced by professionally independent statistical staff in accordance with the Code of Practice for Official Statistics.