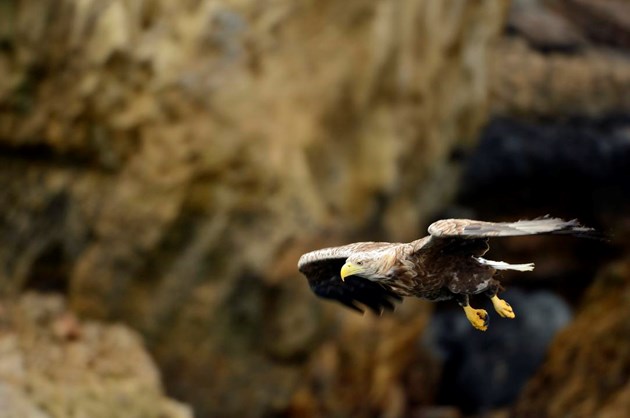 Issued on behalf of the Sea Eagle National Stakeholder Panel

A review of the White-tailed Eagle Action Plan by key stakeholders has looked at the progress made and developed new recommendations to help farmers and crofters deal with the impact of sea eagles on their livestock.

These recommendations will be included in an extension to the plan over the next three years. The report is available on the NatureScot website.

Stakeholders have worked closely with individual farmers and crofters on ‘monitor farms’ to test different management techniques and develop a toolbox of measures, aimed at reducing the impacts sea eagles can have on hill sheep flocks. These included diversionary feeding, scaring devices and licenced manipulation of nest sites outside of the breeding season. The work had mixed results in terms of reducing impacts.

To better understand the scale of sea eagle interactions with sheep, observers spent a significant amount of time on the hill; however, there were few observations of direct interactions, as it is possible that the presence of observers, on open hillsides, deters sea eagle activity. But NatureScot has collected a significant body of circumstantial evidence through work with individual farmers and crofters which points to significant impacts in some areas.

New ideas on improving habitat to support natural prey species will be explored. The scheme may also include licenced activities to reduce serious agricultural damage in situations where all other options have been unsuccessful.

“We recognise the serious concerns that some farmers and crofters have about the impact of sea eagles on their livestock, and we’re committed to continue working closely with them to find solutions. The scheme is about finding a balance between livestock farming and wildlife and recognising the benefits that each brings to us all. This is a great example of working together, with National Farmers Union Scotland, Scottish Crofting Federation, RSPB Scotland, Forest Enterprise Scotland and others, to tackle issues faced by farmers and crofters, while also ensuring healthy populations of this spectacular species.”

Chair of  NFU Scotland’s Environment and Land Use Committee, Angus MacFadyen said: “The Action Plan has made progress in its first three years but a significant number of farmers and crofters continue to see the presence of White-tailed Eagles (WTEs) have an impact on their sheep flocks.  We welcome the significant increase in funding since 2015 and collaborative work on the ground through the monitor farm trials to try and reduce the impact of WTEs on livestock but, with 164 holdings now participating in the scheme, it reflects the recorded increase in the spread and numbers of these birds. Our recent member survey revealed that, unfortunately the majority of respondents did not feel the current action plan had made a significant impact on reducing WTE predation. With the next three years of the Action plan currently being revised, NFU Scotland will be working with the partnership to ensure that Action Plan delivers on significantly reducing the losses that some farmers and crofters are suffering.” 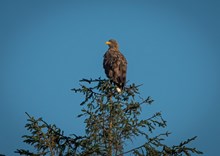