You are here:
Home
News Releases
Public can help prevent spread of invasive aliens as ban comes into force

As a Europe-wide ban on the sale of giant-rhubarb comes into force (Thursday 2 August) Scottish Natural Heritage (SNH) is asking the public to report sightings of this invasive non-native species and help it keep Scotland free of the plant.

SNH is working on an ambitious project to wipe out giant rhubarb in in the Western Isles and wants to stop its spread on the west coast of Scotland and beyond.

People who already have the plant, also known as Gunnera, in their garden can keep it, but they must act responsibly. Allowing Gunnera to grow or spread outside their garden could now be an offence.

Roddy MacMinn, who is leading on the project for SNH said: “Gunnera has become invasive in parts of Harris within the last two decades and is starting to invade other parts of the Western Isles. We are concerned that it could become invasive on parts of the west coast of Scotland and islands with a mild, wet oceanic climate.

“If left unchecked, we’re likely to see an increasing area of land lost to grazing as well as significant impacts on our biodiversity and road-side drains. We would also like people to report sightings of Gunnera growing in the wild in other parts of Scotland too.”

SNH is asking people who see Gunnera growing in the wild in Scotland to report it to Scotland’s environment web.

Roddy said: “We are encouraging people with Gunnera in their gardens to consider either removing the plant entirely, or alternatively cutting off the flower heads each summer before they set seed, then composting with care.”

Giant-rhubarb (Gunnera tinctoria) is becoming increasingly problematic for both crofters and wildlife in the Outer Hebrides.

Originally from South America, the distinctive large leaved plant was introduced as a garden ornamental but has spread rapidly over crofts and ditches. Now in many parts of the islands extensive, dense stands of Gunnera, which can grow up to two metres in height, have established themselves. If left unchecked, we’re likely to see an increasing area of land lost to grazing as well as significant impacts on our biodiversity and road-side drains.

Since 2015, SNH has been working in partnership with the North Harris Trust to develop an effective control strategy for Gunnera in Harris.  This year, as well as continuing to remove plants in Harris, we will begin a study, looking at the feasibility of removing Gunnera from the whole of the Outer Hebrides. The first stage is understanding exactly where Gunnera is currently found, and the public can help by reporting sightings of giant-rhubarb growing in the wild to Scotland’s Environment Website: www.environment.gov.scot. Later this year, we’ll be consulting the community on a five-year, island-wide control strategy and providing gunnera control advice and support to land managers.

In Ireland Gunnera has spread from gardens and is becoming a major weed problem, in particular on Achill Island and in Counties Mayo and Galway.  Search for images from these areas where it has taken over whole hillsides.

Gunnera was first grown in the Great Britain in 1849 and was established in the wild by at least 1908.  It prefers a mild, wet climate with constantly wet soils.  It has become invasive in parts of Harris within the last two decades and is starting to invade other parts of the Western Isles.

According to the Global Invasive Species Database, Gunnera is also invasive in parts of New Zealand and the Azores (Portugal). 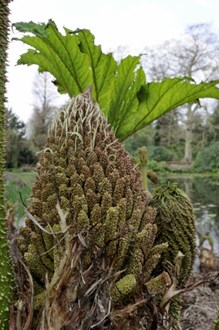 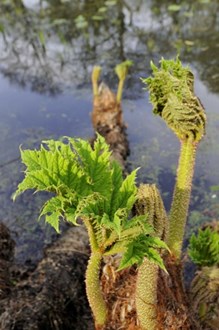