Pine martens found on Mull are not native to the island and probably arrived there accidentally on timber boats about ten years ago, says a report published today (Thursday) by Scottish Natural Heritage (SNH).

Pine martens found on Mull are not native to the island and probably arrived there accidentally on timber boats about ten years ago, says a report published today (Thursday) by Scottish Natural Heritage (SNH).

Once restricted to remote areas of northwest Scotland following centuries of persecution, the pine marten has made a significant recovery and regained much of its former range due to conservation measures put in place to help it.

The species has also ventured into some new areas, including the Isle of Skye after the bridge was built and, more recently, onto Mull.

Andrew Campbell, SNH operations manager, said: “It is important to investigate the implications of a species’ arrival into areas where it was not previously found, particularly an island. They can sometimes cause problems for native species through predation or competition for food and could also potentially cause problems for domestic poultry and game.

“People on Mull value the island’s rich biodiversity and some will have an interest in poultry or game birds, so understandably there will be concerns about the arrival of the pine marten. For these reasons we commissioned this report and are now sharing its findings.”

The report finds that pine marten impacts on Mull’s native species are thought to be confined to some common bird species, although most of these will not be seriously affected. There could also be predation on game birds and occasionally on a few species of conservation concern, such as wood warbler and hen harrier.

The findings are backed up by the experience of pine marten on Skye, an island with similar habitats, bird species and land mass, and where pine marten are also considered non-native.

Andrew Campbell added: “Although a useful first step, the report confirms the limitations of our knowledge of this species’ distribution on Mull and so, with the help of the local community, we’ll actively monitor pine marten to get a better understanding. The information collected on the population size and distribution will allow us to identify appropriate management measures that people can take if necessary.”

Mike Shilson, Chair of Mull Community Council said : “Some islanders have raised concerns with the Community Council about the impact pine marten could have upon Mull’s unique wildlife, particular its bird species. The intention of SNH to work with the community to monitor this species and help develop a management strategy is welcomed. We believe localised control should be permitted where appropriate and we will work with SNH to agree a way forward on this matter.”

Andrew says:” We are committed to working together with folk on Mull to help them address whatever issues of concern they might have. There are various options for active intervention, all of which require to be licensed and will need to be thoroughly thought through. We are available to offer advice if there is a need to address any localised impacts caused by the arrival of pine marten.”

Although re-established in much of its former range in Scotland, the pine marten is still rare in the UK and is a legally protected species.

Commissioned Report 538: Pine martens on the isle of Mull – Assessing risks to native species, will be available on the SNH website from
Thursday, here - http://www.snh.org.uk/pdfs/publications/commissioned_reports/560.pdf

The current pine marten population on Mull is not known with certainty but is thought to be between 20 and 30 animals.

Removal of pine marten can only be permitted under licence. 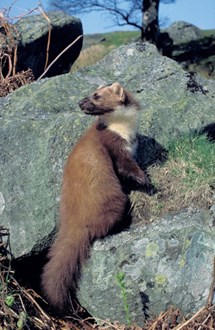