You are here:
Home
News Releases
New Strategy for the Peatlands of Caithness and Sutherland

New Strategy for the Peatlands of Caithness and Sutherland 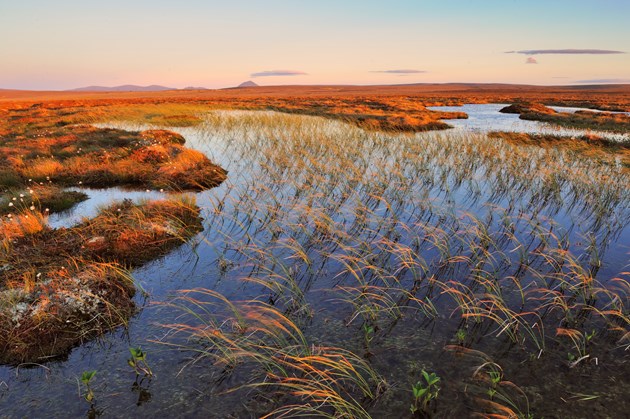 A public consultation has been launched to seek local views on a new draft strategy for the peatlands of Caithness and Sutherland.

Caithness and Sutherland contain one of the world’s most extensive areas of blanket bog. This peatland resource supports a wide range of wildlife, provides us with clean water, helps regulate our climate and is a vitally important store for carbon.

The strategy has been drafted by NatureScot on behalf of the Peatlands Partnership, which was formed in 2006, shortly after the production of the first Management Strategy (2005). It comprises a range of organisations involved in the management of the peatlands, who work together to implement the strategy.

The Partnership is chaired by Professor Stuart Gibb of the Environmental Research Institute in Thurso. He said:

“It is fifteen years since the original strategy was published by the Peatlands Partnership, identifying both need and opportunity for people to learn, enjoy and engage with peatlands.  Since this time, our understanding of the role of peatlands in carbon storage, climate change and in ecosystem services more generally has grown vastly.

“This understanding has been developed and promoted through initiatives such as the ‘Flows to the Future Project’ overseen by the Peatlands Partnership.   This five-year, £11 million project, support by the Heritage Lottery Fund, enabled restoration of blanket bog habitat on a previously unrivalled scale, and helped shift our societal understanding and appreciation of peatlands such as the Flow Country of Caithness and Sutherland.

“Our new draft strategy seeks to build on this success, and includes the aspiration to secure inscription of The Flow Country as a UNESCO World Heritage Site. It also recognises recent changes in public sector policy including the Scottish Government’s declaration of a climate emergency and biodiversity crisis, and ‘green recovery’ opportunities emerging from the global Covid-19 pandemic. However, as with the original strategy we aim to embed the relationship between people and peatlands at the heart of our new approach.”

“This important area of expansive blanket bog requires careful management at the landscape scale to ensure that it remains healthy. The communities and businesses that depend on the peatlands all have a stake in this, and the strategy aims to co-ordinate action to enhance and promote it through sustainable land management and community development.

“Since 2005, we have seen major advances in peatland restoration and related research. Research into the impact of forestry on adjacent peatland and on restoration techniques has guided the removal of inappropriately planted trees and the blocking of peatland drains and furrows across Caithness and Sutherland to raise the water table to facilitate bog re-creation.

“The Peatland ACTION project is helping to restore damaged peatlands across Scotland and in February, the Scottish Government announced an additional investment in peatland restoration of more than £250 million over the next ten years. Our strategy will help to target these funds to Caithness and Sutherland, supporting the rural economy through the creation and development of land-based jobs and skills and providing a nature-based solution to the climate crisis.”

The Peatlands of Caithness and Sutherland draft Management Strategy can be viewed via The Highland Council consultation portal at https://consult.highland.gov.uk/kse/event/35789, or by emailing Janet Bromham at info@loch-side.co.uk.

The peatlands of Caithness and Sutherland are a special place, of national and international importance. Nowhere else in Britain, and possibly the world, is there such an extensive area of this type of peatland (c400,000ha). Together with associated areas of moorland and open water, large areas of the peatlands are protected as Sites of Special Scientific Interest (SSSI). They are recognised to be of national importance for conservation both as a habitat in their own right and because of the diverse range of rare and unusual breeding birds they support. Approximately 145,000ha are also designated as a Ramsar Wetland of International Importance and part of the Natura 2000 series of sites (Special Areas of Conservation - SAC and Special Protection Areas - SPA).

In addition to the natural heritage designations, parts of the peatlands contain many sites and areas of archaeological and historic significance (Scheduled Monuments), as well as thousands of sites of regional and local significance that are more widely spread across the area.

In recent years the huge importance of the UK’s peatlands as a carbon store of national importance has also been recognised, with the peatlands of Caithness and Sutherland being a major component of that national resource.

Within the Caithness and Sutherland Peatlands SAC/SPA, the Scottish Government is committed to avoiding the deterioration of qualifying habitats and the habitats of qualifying species, and the disturbance of species. It must also ensure the site’s integrity and maintenance in the future. Outside the designated site is a still bigger area of peatland, which is also of importance for nature conservation and to which the Scottish Government has commitments under the Scottish Biodiversity Route Map.