A report published today finds that there are more vegetated shingle beaches in Scotland than previously thought – and most of them are in good condition.

Until recently, the information on shingle habitats in Scotland was limited. But a new Scottish Natural Heritage (SNH) report finds there are about 1,120 hectares – or the equivalent of more than 1,500 football pitches – of shingle beaches with vegetation in Scotland.

Shingle coastlines are a distinctive feature of the Solway and Moray Firths and the Isle of Arran, as well as on scattered sites around the coast of Scotland. Outside of north-west Europe, Japan and New Zealand, shingle beaches are found only in a few places world-wide.

Vegetated shingle supports a variety of plants and animals, with some highly specialised species adapted to tolerate harsh coastal conditions. Typical plants include the oysterplant and sea kale, both of which are nationally scarce. A rich array of lichens can also be found on stable, undisturbed, shingle further inland.

Some species of invertebrates also favour shingle habitats, such as the black zipper, sand bear spiders and a number of rove beetles. A range of bird species also use shingle habitats, including terns. The importance of this habitat for breeding terns has led to several conservation designations.

"Coastal shingle is internationally rare and is an important and unique part of Scotland’s nature. Powerful waves form these beaches, which host a fascinating variety of plants and animals in what may seem to be inhospitable conditions. Because of this, we were really pleased to find that shingle habitat is doing so well. Scotland's remote and relatively untouched coasts provide some of the best conditions in Europe for vegetated shingle.

“This new survey adds to our growing knowledge of habitats of European importance in Scotland, and will be part of a new habitat map which SNH is developing." 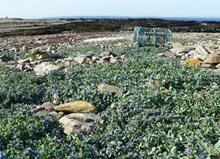 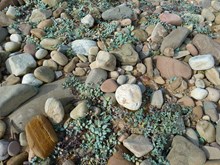