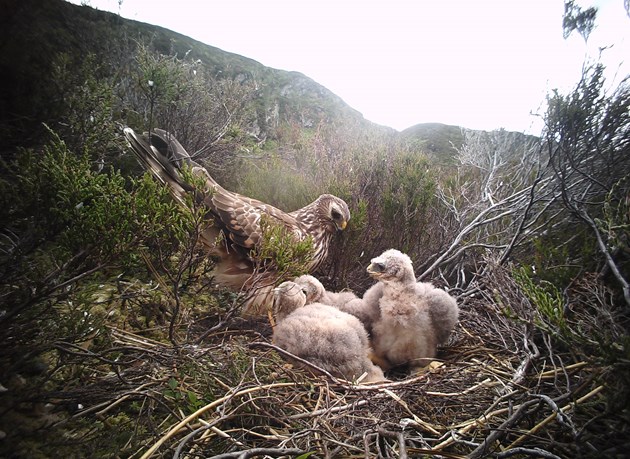 The success of one of Scotland’s rarest birds of prey, hen harriers, is closely linked to the age of parent birds, prey availability and land use, concludes a report published by NatureScot today.

The report, based on five years of camera evidence on 28 estates participating in the Heads Up for Harriers partnership project, found the age of the adult male bird is a key factor in breeding. There was a 91% success rate when males were older than one year, irrespective of the age of the adult female bird.

Not surprisingly, the report also found that nesting attempts and fledging success were higher during warm, dry spring weather, with wetter weather having a negative impact on both the harriers and availability of prey.

The research also found that hen harriers prey were birds 89% of the time with mammals making up the final 10%. However, the report concludes that hen harriers rarely prey on grouse. Meadow pipits were by far the most abundant prey at 77% of birds, with red grouse accounting for only 5.6% of prey.

Over 2 million hen harrier nest camera images were meticulously studied to reveal harrier behaviour and factors impacting their survival. While the majority of estates have some game shooting interest, analysis indicated that harriers fare best on those estates with no shooting interests, with more breeding attempts, nesting success and higher productivity recorded on the majority of non-sporting estates.

Hen harriers have a low survival rate for young birds, and the project showed that where the reasons for failure could be determined, all the nest failures were due to natural factors including predation by foxes and other birds.

Chair of the Heads Up for Harriers Group, Professor Des Thompson of NatureScot, said:

“Hen harriers continue to struggle in Scotland and they remain a rare species, although Scotland holds by far the majority of the UK population with 505 territorial pairs. This report shows that almost half of breeding adult female birds are four years or older and 87% of male birds are older than one year, despite the females being capable of breeding much earlier. This indicates a high turnover of young birds, and while the report does not speculate as to the reasons, this is a worrying statistic.”

“Some fascinating patterns in hen harrier breeding habits have been identified, such as a tendency for nesting on westerly facing slopes, with an increasing preference for nests in higher areas, and the low occurrence of grouse within the sampled 500 prey items.  This information should help land managers better cater for nesting harriers, while providing reassurance of the limited impact on game birds.”

Professor Thompson added: “The report is testimony to the work of the Heads Up for Harriers project group, particularly RSPB and Scottish Land & Estates, the project staff and those estates that have actively participated in the project.”

Information in the report was gleaned by analysing images from 52 hen harrier nests (37 of which had cameras installed), between them fledging 120 young birds. For the full report, see https://www.nature.scot/naturescot-research-report-1209-heads-harriers-image-analysis-2015-2019

Heads Up for Harriers is a Partnership for Action Against Wildlife Crime Scotland (PAW) Scotland project, led by NatureScot. From the project start in 2015, 52 hen harrier nests were located. 35 of these were successful in fledging a total of 120 young. Trail cameras were installed at 37 nests and over two million images recorded.

The Heads Up for Harriers Group are considering a shift in focus to concentrate on areas which can benefit most from intervention. The group will be discussing how best to achieve this with the PAW Scotland Raptor Group in the future.

PAW Scotland is the Partnership for Action Against Wildlife Crime in Scotland.  The partnership includes conservationists, land management groups, law enforcement and government agencies, who have joined together to fight wildlife crime. PAW Scotland established the ‘Heads Up for Harriers’ group. The group raises awareness of this majestic bird, determines the current number of hen harriers in Scotland, and identifies specific threats to their survival. Further information is available at www.gov.uk/government/groups/partnership-for-action-against-wildlife-crime. 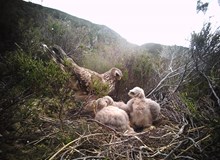 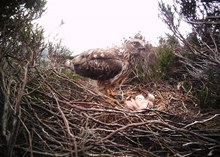 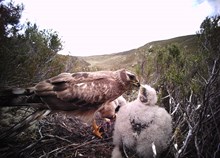