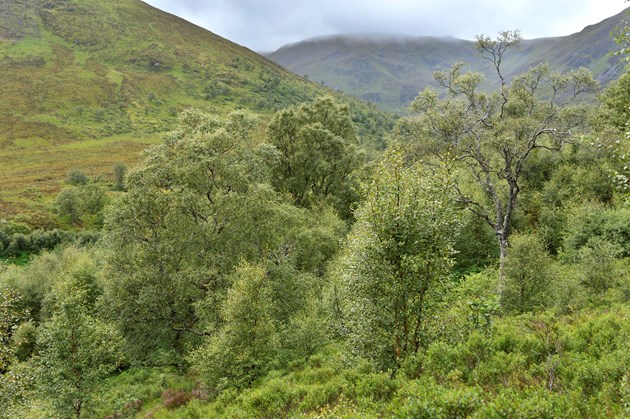 More than 100 hectares of peatland restoration is now underway on the mountainside at Ben Wyvis NNR, thanks to funding from Peatland ACTION.

An isolated area of bare peat in gullies and hags is being sensitively restored to re-vegetate the peat and allow the peatland to function as it should. This will have wide benefits for storing carbon, but also for a variety of species that live on the slopes of Ben Wyvis, and the burns and rivers that flow off the hill.

Meanwhile at Beinn Eighe, the UK’s oldest NNR, a milestone has recently been reached in work to expand and improve the quality of the ancient pinewood fragments on the reserve.

The last of 20,000 trees have now been planted to complete the wildlife corridors between these ancient fragments of woodland. This will create a seed source for future woodland expansion, which will now be focusing on natural regeneration rather than planting.

NatureScot’s Doug Bartholomew, who manages both nature reserves, said: “At Ben Wyvis, it is really amazing to see how the digger operators can transform a landscape from something damaged to something restored in such a short space of time. The landscape has completely changed, which will allow the bog to re-wet, capture carbon and create new habitats for our native plants and animals.

“Meanwhile at Beinn Eighe, we’ve passed a significant milestone this year in our management of the first-ever NNR. The native woodland has already expanded by 65ha, and our long term vision is for nature to take control and provide us with more over the next 70 years. As the woodland expansion develops, it gives us real hope for the future in creating a landscape rich in nature.”

Further south at Creag Meagaidh NNR, landscape-scale restoration is also underway to benefit nature and people. Deer management has been crucial to the success of the returning native woodland expanding, and in a new venture, venison is now being sold locally on the NNR, with funds being used to directly support work on the reserve.

The introduction of ‘no-fence collars’ has meant that the Highland cattle grazing can now be focused in specific areas to help improve habitats, promote more native tree regeneration and increase biodiversity. Visits to Creag Meagaidh are as popular as ever, so some of the infrastructure has been improved to enhance visitor experience, including parts of the spectacular Coire Ardair path.

Creag Meagaidh Nature Reserve Manager Rory Richardson said: “This past year has been an exciting one, with several new projects contributing to progression of the NNR. These projects are all linked, meaning people can now come and enjoy a walk in the regenerating woodlands up to the mountain tops, and go away with some healthy, low-food-miles venison, while contributing to future restoration.”

Meanwhile on Rum NNR, home to one of the largest Manx shearwater breeding colonies in the world, there was relief that the seabirds escaped the ravages of avian flu that devastated many colonies in the summer. Well over 100,000 pairs nest high in the island’s mountains each year.

Rum Nature Reserve Manager Lesley Watt said: “We were very concerned about the potential impacts of avian flu on the Manx shearwaters following confirmation that a dead bird in the colony had tested positive for the virus. Thankfully our monitoring showed that the productivity was in the normal range, meaning that around 69% of nests produced fledged chicks.”

Red-throated divers continued to breed in good numbers on the NNR with a total of 10 chicks fledging in 2022. Control of non-native invasive plants is also underway in the areas around Kinloch village, where rhododendron and cotoneaster had escaped from planted areas. Managing these will prevent them establishing and spreading, smothering the ground flora and destroying native habitats on the reserve.