You are here:
Home
News Releases
Most comprehensive ever North-East mammal atlas launched 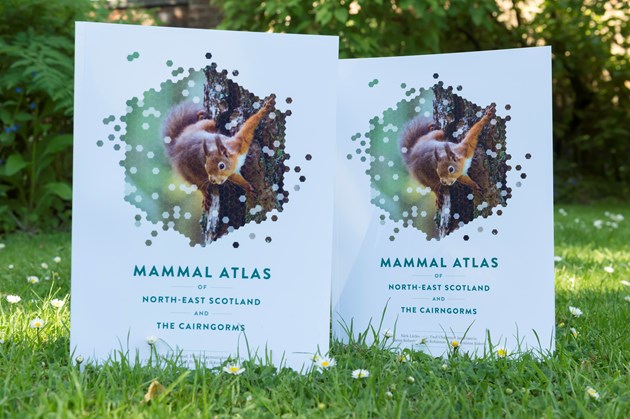 The most comprehensive description ever of land mammals in North-East Scotland was launched in Aberdeen this week, showcasing animals as varied as pine martens, wildcats, bats, deer, seals – and even humans.

The Mammal Atlas of North-East Scotland and the Cairngorms, compiled by the North East Scotland Biological Records Centre (NESBReC) and supported by Scottish Natural Heritage (SNH) and Aberdeenshire Council, is a fully-illustrated atlas. It maps 43 mammals found in the North East, using 77,592 records from 1,472 observers from all over the area and beyond.

It tells some fascinating stories of the many amazing mammals found throughout North-East Scotland, including the recovery of red squirrels, the recent significant spread of pine martens eastward to the outskirts of Aberdeen, and the discovery of a new bat species for the area.

The project, which began in 2013, encouraged the public to report animal sightings. Almost 1,500 people, from those who had never before submitted a mammal sighting through to experienced biological recorders, helped with the atlas. Organisers used novel ways to encourage wildlife reporting, including asking cat owners to report what prey their pets had brought home. People were also encouraged to report roadkill, camera trap sightings and locations where molehills were present. Records of scat and footprints were accepted from more experienced recorders.

The information gathered is depicted in distribution maps for 43 mammal species covering the time periods 1960-2000 and 2001-2015. Each map is accompanied by a photograph of the mammal and a short account of its ecology, conservation and status, in both the local and British Isles contexts. The book also includes information on mammal habitats, species conservation and analysis of distribution patterns.

“This atlas is full of wonderful stories about the animals you’ll find in North-East Scotland. We’re lucky to have such a wide variety of mammals in the area, and we’re grateful to everyone who contributed to gathering such a wealth of information. It’s built an inspiring picture of the wildlife to be protected and enjoyed in this part of the country.”

“We’re delighted to support this wonderful project. The atlas not only gives us valuable information to help us protect animals in the North East, but it has also brought together people who love wildlife, of all levels of experience and knowledge, to play a role in wildlife conservation.”

The atlas encompasses the local authority areas of Aberdeen City, Aberdeenshire, Moray and the whole of the Cairngorms National Park. The total area covered is 11,629km2, which is around 15% of Scotland’s land area. This region includes approximately 297km of coast and land up to 1,309m altitude at the second-highest point in the UK.

The atlas was launched yesterday afternoon at the Zoology Lecture Theatre at the University of Aberdeen.It is part of the ongoing work for Scotland’s Biodiversity A Route Map to 2020 which is focussed on conservation of some of Scotland’s most important wildlife.

The book is available to buy in shops across North-East Scotland.

NESBReC collates, manages and disseminates data on all types of wildlife in North-East Scotland. It is based in Aberdeen and is part of Aberdeenshire Council. For more information, visit our website at www.nesbrec.org.uk or visit our Facebook page on www.facebook.com/NESBReC/

The Mammal Atlas of North-East Scotland and the Cairngorms is also supported by the Forestry Commission Scotland (FCS), Cairngorms National Park Authority, and the Scottish Ornithologists Club. 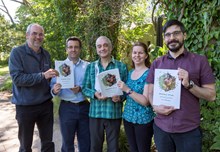