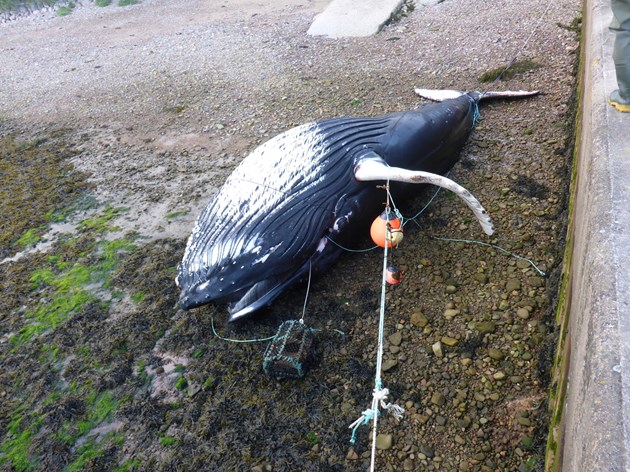 NatureScot has published a report today on the first phase of the Scottish Entanglement Alliance (SEA) project, the first of its kind in the UK, which brings together commercial creel fishers, NatureScot, research scientists, and marine  mammal conservation and rescue charities to better understand the scale and impacts of marine animal entanglement in Scottish waters.

Entanglements in fishing gear and marine debris can have both welfare and conservation impacts on marine animals, causing injury, impairment and death. Entanglement is the largest identified cause of death due to human activity in minke and humpback whales in Scottish waters, and the only known cause of human-driven mortality in basking sharks and marine turtles. During at-sea surveys, over 22% of live minke whales observed on the west coast of Scotland showed evidence of previous entanglements.

Fishers also participated in training events and workshops to promote best practice, reduce entanglement risk, and safely disentangle large marine animals from fishing gear. This training gave fishers the ability to call on each other and safely provide a rapid response to any entangled animal.

“We all find it upsetting to see our majestic marine species in distress, so we’re really heartened by the strong commitment and willingness of the fishing industry to work towards practical, safe and sustainable solutions on the issue of entanglement. We will only solve this problem by working in collaboration on potential legislative changes. The new reporting obligation will also help us to understand the extent of the issue more clearly.”

Based on feedback from the fishers, the report recommends a number of ways to combat marine entanglement, including trials of weighted ropes (ropes which sink rather than float) and tighter regulation to limit the amount of gear in the water and caps on creel numbers, all of which were supported by fishers involved in the study. Other recommendations include developing seasonal distribution maps of vulnerable species to identify potential high risk areas, and trials of ‘on-call’ – or ropeless – fishing systems.

“The SCFF are proud to have taken part in this study which is at the forefront of understanding and finding mitigations for tackling the global problem of marine animal entanglement in fishing gear. The project demonstrates when an alliance of government, industry, academics and conservation groups collaborate, solutions can be progressed to a degree that would otherwise be hard to achieve. We look forward to collaborating with our partners on sourcing funding for the next phase of this project, which will be to research and develop equipment and strategies to reduce entanglement of cetaceans and sharks in our fisheries.”

This research focussed on entanglements in fishing gear associated with the creel sector; however, cases involving monofilament line and trawl netting have also been observed.

We are currently looking at funding opportunities for a proposed phase two of SEA. This would extend the research over a wider geographical area and examine entanglements in other types of fishing gears commonly used in the UK. It would also include further research on how fishing can be modified, as well as looking at the most high-risk areas and times for fishers to avoid.

There has been a rise in entanglement cases in recent years, from four in 2014 to 18 in 2018 and 15 in 2019, according to Scottish Marine Animal Stranding Scheme (SMASS) figures. However, recorded cases were down to five in 2020, as reports decreased during lockdown. There was a decrease in both reports and response, and also a reduction in the number of reports coming from fishers or boat users at sea. So far in 2021, there have been eight reports and there is now a legal obligation for fishers to report entanglements.

Scottish Creel Fishermen's Federation is the national trade association representing some of the interests of Scotland's low impact artisanal inshore creel, dive and line fishers. SCFF advocate for improved fisheries management and the creation of a low impact fisheries zones in Scotland's inshore waters with preferential access to fishing opportunity based on social, economic and environmental criteria.

WDC, Whale and Dolphin Conservation, is the leading global charity dedicated to the conservation and protection of whales and dolphins. We defend these remarkable creatures against the many threats they face through campaigns, lobbying, advising governments, conservation projects, field research and rescue. For more information, see Whales.org

British Divers Marine Life Rescue is an international marine animal rescue organisation based in the UK and is a registered charity.  The aims of the organisation are to provide a rescue service for marine wildlife, to support existing rehabilitation centres and to develop new methods of treatment, transport and care.  Website www.bdmlr.org.uk

The Hebridean Whale and Dolphin Trust's vision is of healthy Hebridean seas for whales, dolphins, porpoises and people. A registered charity, established in 1994 and based in Tobermory, Isle of Mull, the Trust works to conserve Hebridean whales, dolphins and porpoises through robust science, inspirational education and meaningful engagement, so they thrive in harmony alongside coastal communities.

Scottish Marine Animal Stranding Scheme is operated by the University of Glasgow and receives funding from the Scottish Government and other sources. The scheme investigates the cause of death of marine animals stranded around Scotland’s coast. Through investigation of casualty animals, the scheme collects detailed information that can be used to assess threats and pressures on some of Scotland’s most iconic marine wildlife. 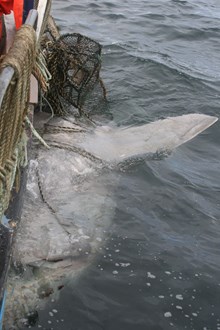