You are here:
Home
News Releases
£1.9 billion boost from walking and cycling

£1.9 billion boost from walking and cycling 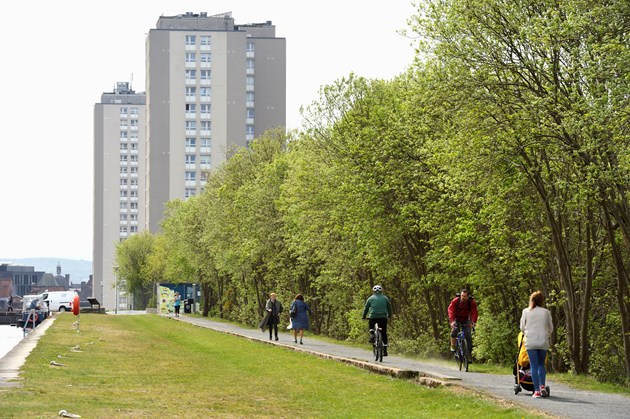 Users of Scotland’s National Walking and Cycling Network (NWCN) spent £1.9 billion in the local economy in 2019.

A new report from NatureScot, Sustrans and Scottish Canals demonstrates the huge benefits of the network for the economy, tourism, health and wellbeing.

The NWCN includes Scotland’s Great Trails, the National Cycle Network and Scottish Canals towpaths and stretches 6,879km across the country.

Walkers and cyclists made 145.1 million trips on the network in 2019, spending almost £2 billion and supporting around 27,500 jobs.

Use of the routes and the associated reduction in car travel is estimated to have contributed a further £108 million to the economy, most significantly through improvements to health outcomes.

Walking and cycling trips on the network are estimated as taking 19.5 million car journeys off the road over the year, saving 7.1 million kg of CO2e.

Meanwhile the vast majority of recreational bikers and hikers said the network had helped them to increase their physical activity (84%), improve their wellbeing (75%) and boost their overall life satisfaction (93%).

Since 2015, NatureScot, Sustrans and Scottish Canals have been working together on an ambitious programme of improvements to the network, spending £30m on improving 625km of strategic walking and cycling routes.

“Covid-19 has led to a surge in the number of people accessing the great outdoors close to home, reinforcing the need to build on that potential. The report also highlights the important role that active travel can play as a nature-based solution to climate change.

“At NatureScot we are making a significant investment in the network to support a green recovery from the pandemic, tackle climate change and help more people enjoy the outdoors, particularly those groups that are currently underrepresented.

“Most recently this includes almost £111,000 to make improvements on several of Scotland’s Great Trails, improving access for all.”

John Lauder, Deputy CEO of Sustrans, said: “The rise in walking, wheeling and cycling over the past number of months has demonstrated huge public appetite to make happier and healthier journey choices across Scotland.

“Many people, regardless of age or ability, have discovered their local active travel routes for the first time. We now have a huge opportunity to maintain this momentum and deliver a fair, prosperous and green recovery for everyone in Scotland.

“This report demonstrates the huge environmental, health and economic benefits of investing in walking, wheeling and cycling. Bold, long-term support and backing is now needed to build upon this positive shift towards active journey choices.”

Catherine Topley, CEO of Scottish Canals said: “This report showcases the value of the National Walking and Cycling Network in tackling climate change and improving health across Scotland.

“At Scottish Canals we are determined to deliver sustainable walking and cycling routes along our canal towpaths by future proofing our infrastructure with projects such as Stockingfield Bridge in North Glasgow. Our bold and ambitious plans for the canal network will allow the people of Scotland to travel coast to coast along our towpaths whilst enjoying nature along the way.”

About Sustrans Scotland - Sustrans is the charity making it easier for people to walk and cycle. We connect people and places, create liveable neighbourhoods, transform the school run and deliver a happier, healthier commute. Join us on our journey. www.sustrans.org.uk

People excercising beside the Forth and Clyde canal, Glasgow. ©Lorne Gill/NatureScot