You are here:
Home
News Releases
From Beinn Eighe to Benghazi

From Beinn Eighe to Benghazi

An innovative method developed in Scotland to help conserve genetic diversity in wild species is being trialled in Libya thanks to a new collaboration.

Scientists working to conserve plants, animals and other wild species in the Green Mountain area of north-east Libya are using a ‘genetic scorecard’ system developed last year by a team of researchers, led by University of Edinburgh and the Royal Botanic Garden Edinburgh, together with NatureScot.

Genetic diversity is the differences among individuals due to variation in their DNA, and allows populations to adapt to environmental change. Scientists around the globe are increasingly recognising the importance of protecting genetic diversity in the battle against the twin crises of biodiversity loss and climate change.

The scorecard system assesses species’ genetic diversity, threats to that diversity and potential responses. In Scotland this has included the first UK Gene Conservation Unit at NatureScot’s Beinn Eighe National Nature Reserve which is important for its Scots pine.

As well as Scots pine the scorecard focused on species such as heather, red squirrel, golden eagle and Scottish bluebell. Now scientists in Libya are using the scorecard for native species there – including Aleppo pine and the Cyrenaican wild artichoke.

The University of Benghazi’s Associate Professor Dr Tarek Mukassabi has had to face additional challenges in the course of his work - including being challenged by local security guards in the area.

He said: “The Green Mountain, in Cyrenaica, has the richest vegetation ‎diversity of the eastern end of the north coast of Africa.

“This area might be vulnerable to climate ‎change and its impact on biodiversity has to be assessed accurately. I was keen to explore ways of investigating and safeguarding the genetic diversity of this unique region, and this collaboration with NatureScot is helping us to do that.

“We think that establishing a new national strategy, developing wild conservation areas and increasing public ‎awareness of the importance of wild plant species could conserve the vegetation in this region of the ‎world which is located on the brink of critical climate conditions.”‎

NatureScot’s David O’Brien, one of the project leaders, said: “When we developed the score-card method, our hope was that it would be expanded and adapted to help other countries in their work to tackle biodiversity loss and climate change.

“Collaborating with Benghazi University has been a pleasure and we hope that what we’ve learned at Beinn Eighe will work on the Green Mountain in Libya too.

“While they face some tremendous challenges, this project can help safeguard biodiversity for the future and to the benefit of the Libyan people.”

Welcoming the collaboration during Scotland's Climate Week, Biodiversity Minister Lorna Slater said: “Scotland is at the forefront of developing new methods to conserve genetic identity, working with other countries to protect many wild species around the world.

“As we approach COP26 in Glasgow later this year, this innovative project is just one of the ways we can demonstrate our commitment to tackle biodiversity loss and climate change on a world stage.

“Our new biodiversity strategy will be published next year and will set out what we will do to stop nature loss and support its recovery. The strategy will include a set of nature recovery targets, including a commitment to protect 30% of land and sea for nature, and highly protect 10%, a world-leading target."

The Green Mountain is a biodiversity hotspot in north-eastern Libya. It has the highest rainfall of anywhere in the country – a relatively modest 60 cm (24”) a year, comparable with the driest parts of Scotland (East Lothian). The mountain is a refuge for animals such as hyenas and rare insects, and includes a vast diversity of plants.

The isolation of the Green Mountain means that even those species that are more widespread have unique genetic adaptations. These variations must be protected, and allowed to continue to adapt to environmental change, if the Green Mountain is to remain just that: green.

Without genetic diversity, species are even more vulnerable to pressures from climate change or new diseases. If species decline, they can change the whole ecosystem, leaving the entire region more vulnerable to extreme weather including drought or flooding. While this is also the case in Scotland, the risks are starker in the extreme climate of North Africa.

Scotland’s leading role in developing genetic indicators has also been matched with conservation in the wild. NatureScot’s Beinn Eighe NNR in Wester Ross was declared as the UK’s first Gene Conservation Unit in 2019 and since then there have been further sites across the country.

The Green Mountain, Jebel Akhdar, in north-east Libya is a hotbed of biodiversity ©Tarek Mukassabi 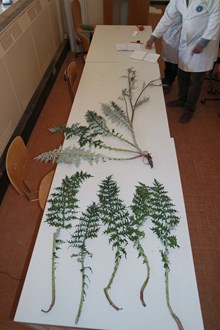