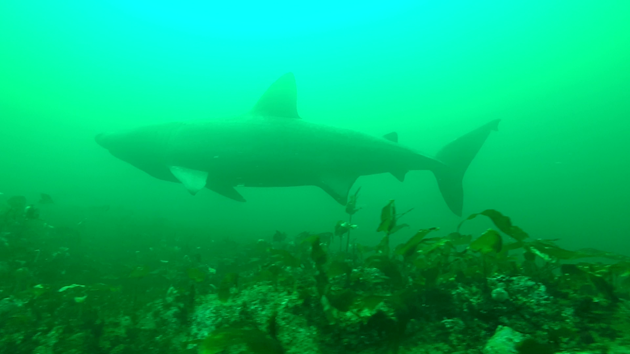 The first study to successfully track a basking shark using a robot camera has shed new light on the behaviour of the world’s second largest fish.

An autonomous ‘SharkCam’ underwater vehicle (AUV) was deployed in the UK for the first time last summer to observe and gather footage of the behaviour of basking sharks in the Inner Hebrides.

The REMUS SharkCam technology is owned and operated by the Woods Hole Oceanographic Institution (WHOI). The project is funded by WWF/Sky Ocean Rescue, NatureScot, WHOI and the University of Exeter.

Little is known about the underwater behaviour of the globally-endangered species, despite basking sharks being prevalent in the waters off the west coast of Scotland.

The SharkCam followed three basking sharks below the surface of the water, collecting video of their behaviour from a distance as they swam off the coast of Coll and Tiree.

The international team of researchers recently published their findings in the journal Animal Biotelemetry.

Detailed examination of the footage revealed the sharks spending an unexpected amount of time swimming near the seabed - a behaviour which has not often been reported for the species.

Notably the sharks were not seen to be feeding – which researchers believe adds weight to the theory that the species visits Scottish waters not to feed but to breed.

Dr Suzanne Henderson, NatureScot Marine Ecosystems Manager, said: “While we weren’t lucky enough to capture courtship or mating behaviour on camera this time, this innovative study has shed more light on the lives of these spectacular giant fish.

“The fact that the sharks spent much more time swimming just above the seabed than we previously thought, and with their mouths closed, is really interesting, particularly as the species is often seen as a pelagic or near-surface filter feeding shark. It suggests we may have to rethink not only how many basking sharks are in Scottish waters, but why they are here, as it’s likely not only the plankton they come for.

“The insights the technology has provided about the habitats the sharks use are also invaluable, and will help inform how we protect and conserve the species in future.”

Dr Lucy Hawkes, Senior Lecturer in Physiological Ecology at the University of Exeter and National Geographic Explorer, said:  “This project gave us a unique opportunity to deploy some of the most advanced animal tracking technology on the planet on these amazing sharks.

“The footage was quite astonishing and really made us look at the work we have been doing in the Sea of the Hebrides in a new light. We hope to continue to search for evidence that this may be the elusive breeding spot for the basking shark.”

Dr Lyndsey Dodds, Head of Marine Policy at WWF-UK, which helped support the AUV missions, said: “These missions have given us a wonderful new window into the mysterious underwater world of this huge fish, highlighting previously unseen behaviour, close to the seabed. And the more we know about basking sharks, the better we can protect them.

“This insight reinforces that the waters around the islands of Coll and Tiree are incredibly important to basking sharks, which adds weight to the case for the Sea of Hebrides to be given Marine Protected Area status.”

Amy Kukulya, WHOI Research Engineer and SharkCam Principal Investigator, said: “Every time we deploy our tags and SharkCam, not only do we observe something unexpected, but we collect valuable insights that enable us to keep improving this revolutionary technology.  Longer tracks and a larger sample could uncover why these amazing animals are hugging the seafloor.”

Fieldwork for the project took place in the proposed Sea of the Hebrides Marine Protected Area (MPA) – one of four possible MPAs currently under consideration by the Scottish Government. MPAs are specially designated and managed to protect marine ecosystems, habitats and species, and play an important role in conserving our seas.

The area is one of only a few world-wide where large numbers of basking sharks are found feeding in the surface waters each year.

NatureScot is the new name for Scottish Natural Heritage - putting nature at the forefront of everything we do as we work towards a nature-rich future for Scotland.

Footage is available on request.

University of Exeter is a Russell Group university that combines world-class research with very high levels of student satisfaction. Exeter has over 21,000 students and is in the top one per cent of universities worldwide. Exeter is also ranked 10th in the Guardian University Guide 2020 and 14th in The Times and The Sunday Times Good University Guide 2018. In the 2014 Research Excellence Framework (REF), the University ranked 16th nationally, with 98% of its research rated as being of international quality, while in 2017, Exeter was awarded a Gold rating in the Teaching Excellence Framework (TEF) assessment.

WWF (Worldwide Fund for Nature) is one of the world’s largest independent conservation organisations, active in nearly 100 countries. Our supporters – more than five million of them – are helping us to restore nature and to tackle the main causes of nature’s decline, particularly the food system and climate change. We’re fighting to ensure a world with thriving habitats and species, and to change hearts and minds so it becomes unacceptable to overuse our planet’s resources.

WWF. For your world.

For wildlife, for people, for nature.

Find out more about our work, past and present at wwf.org.uk

WWF’s five-year partnership with Sky will see us working in the oceans around the UK, Ireland, Italy, Germany and Spain. Our goal is to protect wildlife and ecosystems while reducing damaging activities and promoting truly sustainable development. We are also working to inspire millions of people to make simple changes to reduce the amount of plastic they throw away. And together, we're building a movement of Ocean Heroes.

The Woods Hole Oceanographic Institution is a private, non-profit organization on Cape Cod, Mass., dedicated to marine research, engineering, and higher education. Established in 1930 on a recommendation from the National Academy of Sciences, its primary mission is to understand the ocean and its interaction with the Earth as a whole, and to communicate a basic understanding of the ocean’s role in the changing global environment. For more information, please visit www.whoi.edu.