You are here:
Home
News Releases
Exhibition of nature photography to help celebrate the life of John Muir

The images were all taken in and around the Moine Mhor NNR, during a weekend of workshops organised by Scottish Natural Heritage (SNH) and Kilmartin Museum as part of the Year of Natural Scotland 2013 celebrations. The workshops were led by multi award winning wildlife photographer Philip Price, founder of Loch Visions, and were held over John Muir’s birthday weekend last year.

The exhibition opens on the 17th April to coincide with the launch of the John Muir Festival and will run until 1st May at The Mill on Taynish NNR, by Tayvallich. This historical building has been recently renovated and given a new lease of life as an open air exhibition space.

John Muir was a passionate conservationist from Dunbar who is widely regarded as the inspiration for setting up Scotland’s two National Parks and 47 stunning NNRs, three of which are here in Argyll – at Moine Mhor, Glasdrum and Taynish.

Doug Bartholomew, reserve ranger at Taynish NNR says: "We are delighted that this exhibition at The Mill will be a part of the John Muir Festival this year, a celebration of the work of John Muir and his impact upon our natural heritage conservation across Scotland. Taynish is a magical place, where ancient Atlantic oakwoods sweep down to the shores of Loch Sween, so if you're planning a trip to the reserve, visit The Mill whilst you're there. We are also delighted to have included in this exhibition, the Young Scot west coast picture competition winner which was held in 2013 and covered by Oban Times.”

The new 134-mile John Muir Way lowlands trail will officially open on 21 April 2014 during the first ever Scottish John Muir Festival marking both the conservationist’s birthday and the centenary of his death.

The new trail is a coast to coast affair running from Helenburgh on the west coast across to Dunbar in the east via a mix of castles, historic towns and villages, as well as Scotland’s first national park, Loch Lomond and Trossachs National Park. 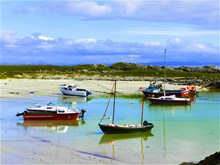 Winning photo in the West Coast competition by Euan R. 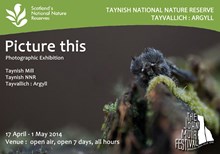