You are here:
Home
News Releases
Dive in to explore Scotland’s hidden treasures

The dives feature computer animation to reveal some of Scotland’s hidden marine landscapes and the variety of animals and plants that live there. You can take a dip with bottlenose dolphins amongst the seagrass meadows of the Sound of Barra, or swim with basking sharks and rare fan mussels in the rich waters off the Small Isles.

“We are all used to seeing spectacular underwater footage on television from exotic locations such as the Caribbean or Australia’s Great Barrier Reef. Many of us are probably less familiar though with the rich variety of marine life in the seas around Scotland. We hope these dives will give people a feel for just how special the seas here are and encourage them to explore the sea life of the Hebrides for themselves.”

The virtual dives were created using real survey data, video footage, photography and sound recordings, to reflect, as accurately as possible, the fascinating and colourful environment in Scottish waters.

The dives focus on two of Scotland’s most notable sites for marine wildlife. Scottish Government recently designated the Small Isles location as a Marine Protected Area (MPA) and has recommended the Sound of Barra to the EU as a Candidate Special Area of Conservation.

You can find the virtual dives on SNH’s Scotland’s Seas Interactive webpage, where you can also track the movements of basking sharks, download free photos and explore the marine life of Loch Sunart. 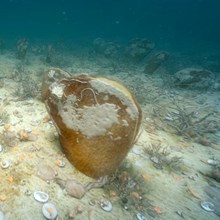